Uncovering the Underlying cause of inflammation

Approximately 80% to 90% of pericarditis episodes are deemed idiopathic and presumed to be postviral, but most clinicians may not fully understand the underlying cause for the recurrences.1 Emerging evidence indicates that recurrences of pericarditis have an underlying pathophysiology driven

Interleukin-1 (IL-1) is a master cytokine of local and systemic inflammation.4,5

IL-1 belongs to the IL-1 superfamily of cytokines and cytokine receptors, comprising 11 distinct family members with both pro- and anti-inflammatory functions.5-7

The master cytokine of inflammation

Multiple characteristics have led to IL-1 being referred to as a master cytokine of local and systemic inflammation4,5:

The significance of IL-1α and IL-1β

IL-1α and IL-1β play an important role in the autoinflammatory cycle of recurrent pericarditis. The IL-1α precursor is present and active inside healthy cells. During pericardial injury, cell death occurs and IL-1α is released and able to activate adjacent cells bearing the IL-1 receptor. In contrast, IL-1β is inactive and a product of specific immune cells. It needs to be cleaved by caspase-1, which itself requires activation after assembly of the inflammasome.2,5

This interaction between IL-1α and IL-1β triggers and drives ongoing tissue injury in the pericardium.2,3

Why does pericarditis recur again and again? 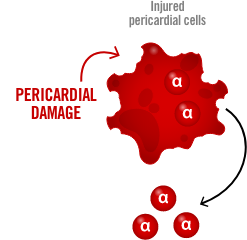 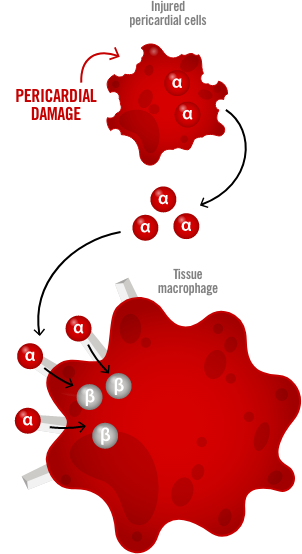 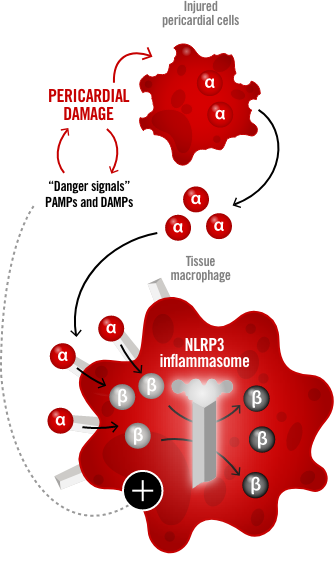 The pathophysiology of recurrent pericarditis involves a multistage autoinflammatory process. It begins with pericardial damage that causes pericardial cells to die and release IL-1α, which is already present in the cells.2

The released IL-1α initiates a localized inflammatory reaction by attracting neutrophils through chemotaxis.2

A structure inside macrophages called the inflammasome then cleaves and activates IL-1β.2

These danger signals stimulate the inflammasome to produce even greater amounts of IL-1β and induce more pericardial damage and inflammation.2

Active IL-1β is then secreted by macrophages.2

The ability of IL-1 to stimulate its own production creates a continuous cycle of inflammation driven by both IL-1α and IL-1β.2,3

Role of Interleukin-1 in the Pathophysiology of Recurrent Pericarditis

Interleukin-1 (IL-1) is a master cytokine of local and systemic inflammation.4,5

This interaction between IL-1α and IL-1β triggers and drives ongoing tissue injury in the pericardium.2,3

The ability of IL-1 to stimulate its own production creates a continuous cycle of inflammation.2

Learn more about the scope and severity of recurrent pericarditis.

You are now leaving this site